Proms evening with farewells and unusual Finale… with a bucket

The Centre of Musical Excellence in Lanner rang with some traditional faire to mark the conclusion of the Lanner and District Silver Band’s summer season and in the process was able to make a sizable donation to research into Motor Neurone disease. Featured soloists in the concert were Steve Coad and Mark Bray, who played the duet Rondoletto for Two Euphoniums and Emily Evans who played the Jennifer Rush hit, The Power of Love.

The evening also marked a brace of farewells with the concert being the last performance with the band of two of its members. The first farewell of the evening was to Solo Horn player Emily Evans as she commences her studies at the Royal Welsh College of Music and Drama later this month. Emily is very much a rising star in the Brass Band world, not only is she the current Principal Solo Horn of the National Youth Band of Great Britain but the day before making her last public appearance with the Lanner Band, also appeared as a guest player with the Tredegar Town Band in their defending champions performance at the British Open Championship in Birmingham.

The second farewell of the evening was to cornetist, Nessa Cawte who is leaving Cornwall to study mathematics at Aberystwyth University after spending 2 very happy years in the “Lanner Family”.

On a happier note, the band is delighted to welcome back former Repiano Cornet player, Roland Woods taking over on Solo Horn from where Emily has left off. Roland said, “Lanner has always been a very welcoming band and I maintained many good friendships there even when I thought I had retired from playing. I had never considered playing tenor horn before but I’m enjoying it more than I could have imagined, I’m having the time of my life”.

The packed hall eagerly anticipating the traditional “Last Night of the Proms” favourites and they weren’t disappointed. In particular rousing performances of Henry Wood’s Fantasia on British Sea Songs and Land of Hope and Glory brought the house down.

However, the concert did not finish once the last note had been played. Earlier in the evening, a bucket was placed on stage it was announced that if at the end of the concert it contained at least £100 then both Musical Director, Stuart Chappell and Band Chairman, Lee Rouse would endure the “ice bucket challenge” with the proceeds being donated to Motor Neurone Disease research. It was noticeable that band members were at the front of the queue to donate and, suffice to say, both Stuart and Lee ended the evening cold and wet but also very happy.

Stuart said, “We’ve had a great summer season and the band has put in the hard work I’ve become accustomed to seeing them do. We’re always sad to lose any of our players but in Emily’s and Nessa’s cases, it’s for the very best of reasons and it’s always heartening that they both want to look in on us whenever they’re home from Uni. In return, we’ll be keeping an eye on their progress and respective careers with interest and wish them the very best of luck for the future. Lee and I discussed making use of the current ice bucket challenge craze to raise money for Motor Neurone Disease research, it’s an insidious illness and going through the ice bucket challenge is a very small ask if it will help make lives better in any way for any sufferers of MND”.

Lee added “The efforts that we have put into the Lanner Brass Academy are really starting to bear fruit, three of the academy members, Siana, Mo and Billy have been playing with the band throughout the summer, they have really enjoyed the experience and we’ve enjoyed having them there”. 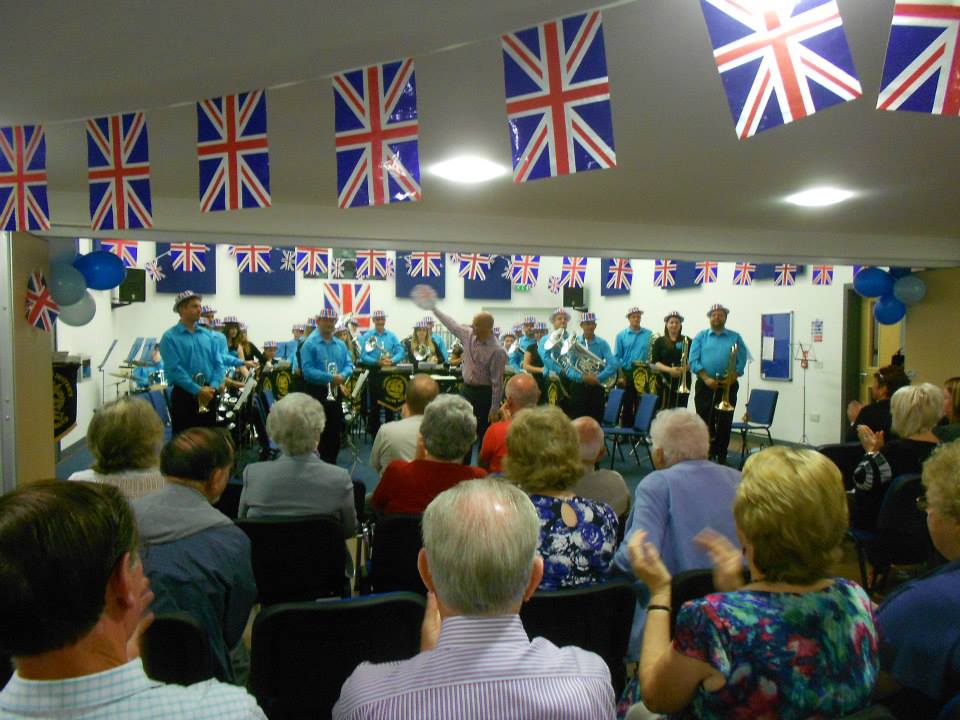